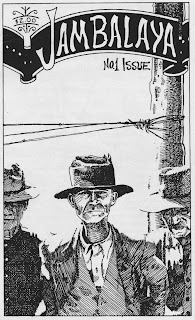 At some point in 1995 Dylan and I were completely geeking out on 1930's and 1940's pop culture, so we decided to make a minicomic/zine together in which everything was of or from that era. This became Jambalaya #1. Dylan's contributions to this were the front cover, his Hank Williams bio-comic (the first time it was published), and a charming article on the work of Garrett Price. On the inside front cover he wrote " If you want to talk about old comic strip/book artists, then just write me," which I love because, as you know, he absolutely meant it. We planned a second issue, and I still have the cover art I drew for it. But we broke up before it came together, and that was that.

Click here to download a pdf file of Dylan's work from Jambalaya.
Posted by Gabrielle Gamboa at 10:24 PM

We are attempting to archive the life and work of Dylan Williams: Collected writings, comics, artwork, sketches, letters, stories, photos and tributes.

This is an ongoing project compiled by Dylan's friends and family. If you have something you would like to contribute, please write to tom (at) iwilldestroyyou (dot) com